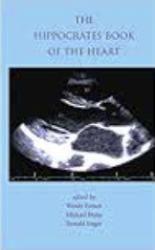 The Hippocrates Book of the Heart

This substantial volume contains about one hundred poems on the subject of the heart – a theme that is interpreted quite broadly as we shall illustrate below. It also includes ten short essays, written by medical professionals, which focus on promoting public understanding of heart health. The frequency with which the word “exercise” appears in these essays might lead one to conclude that one of their central messages is “don’t sit around reading/writing poetry: get out and do some running!” But it would be wrong to draw such glib conclusions about the medical profession’s hostility to literature because a respectable percentage of the poems have been written by doctors. And it need not be thought that these are “token” pieces included among more significant work by full-time poets: the three editors (Wendy French, Michael Hulse and Donald Singer) have set a very high standard in their selection of material; and they have, furthermore, taken great care over the way the poems are ordered so as to complement one another.

I can of course only discuss a sample of the many poems on offer. Broadly speaking, they fall under three headings: those which address the biology of the heart directly; those which regard the heart as the seat of the emotions – especially love; and those which spiral off into all sorts of unexpected and sometimes tenuous cardiac associations.

One point where the heart and poetry naturally intersect is in discussions of sound and rhythm. Thus Norbert Hirschhorn identifies the heart’s beat as an iambic lubb dup, lubb dup but Peter Goldsworthy hears Plato, Plato and perceives it as trochaic. Diana Pooley elaborates on Hirschhorn’s observation and finds that an aching heart runs through a cycle dlubb flub ,flub dlubb, dlubb dlee; while Jan Owen detects the steady exhortation courage, courage, courage. Danielle Hope dispenses with sound altogether:

Fiona Moore recognizes that the heart’s steady function often goes unrecognized: “My heart my heart loyal beast / I remember you only if you / falter …”. On the other hand, if we are too conscious of the heart’s activity we risk being constantly reminded that it is counting down our remaining minutes – and, as Geoff Page bluntly observes, “three billion beats or so per life / is what we’ve been assigned.”

and he mentions some(awful) possibilities suggested by a Peter Lorre horror film. Elsewhere Michael Bartholomew-Biggs offers a pseudo-villanelle on the subject, using variations on the refrain “rejection is a major issue”.

Several poems sit interestingly between the purely medical and the emotional. C K Stead portrays a man (who admits he is “getting on”) being examined by a female doctor who checks “that faint intra-cardiac shunt in the beat”. The elderly patient experiences

A number of poems deal with the heart purely as an emotional centre. Jenny Bornholdt’s ‘In Love’ ends with the wonderful observation “The heart has no corners / and is stretched / to its limit.” Simon Rae finds that love administers such a battering that his heart feels like “an ancient leather football”; whereas Gerard Smyth concedes that while the heart does indeed suffer it can also be a cause of suffering and may justly be “accused /of grudges, faults the cold rebuke.” Lawrence Sail conveys a similar idea of each heart having an archive which “holds / each crazy wish, each excess, / every instance that has caused it / to soften or harden.” Carolyn Jess-Cooke, on the other hand, identifies the heart as the place where fears reside. Afraid of being in a road accident on a long car journey with her children, she sees herself “panicking because my heart these days is outside my body // and in fact I no longer have skin or veins…”

The Carole Satyamurti poem which follows this one borrows the deceptively lilting nursery rhyme form but brings in darker content:

Anne-Marie Fyfe’s imagination ventures even further, hazarding an elegant and intriguing answer to a question few readers may have thought of asking

Michael Farrell in ‘Pope Pinocchio’s Heart” indulges in multiple splendid conceits such as “Do you like tasting honey? My heart / has its own hive…” or “The Vatican powers the country / Yes: my heart means that electricity / costs nothing to produce in Italy”

Rather appropriately, Rafael Campo’s ‘Cardiology’ which closes the poem section refuses to be categorized: it falls into the fantasy realm because it is composed of unrelated sentences; and yet at the same time it touches both the biological and the emotional.

And what of the ten short essays in the last part of the book? They are all very accessible to the lay reader; and the general aim is to make us aware of things we can do to reduce the risk of heart disease. While there is some overlap, insofar as several of the pieces deal with lifestyle issues, the essays reinforce and complement one another. We learn from Constantinos Missouris, for instance, that a survey in Australia suggested that only one in three people is able to list the most common cardiac risk factors; but after reading these 45 or so pages we should all be better informed. To give a few examples: we are told by Donald Singer about the benefits of the Mediterranean diet; a number of authors offer advice on various forms of exercise from regular brisk walking to marathon running; we learn from Tabassome Simon that different kinds of obesity pose different challenges in the treatment of heart disease; and we hear first-hand from John Jackson about the first six months of the recovery process for a sixty-something patient after major heart surgery.

In the longer, closing article we get an interesting potted history, by Wade R Dimitri, of heart surgery from the 19th century (when almost every attempt resulted in failure) through to the present day when quite complex procedures have failure rates as low as 2%. The single event best known to lay people is probably the first successful human heart transplant by Christian Barnard in 1968. (The author overlooks the even earlier mention of a heart transplant in the book of Ezekiel: I will take away your stubborn heart of stone and give you an obedient heart.) But the events that preceded and followed this landmark achievement are also very interesting and reveal the courage and persistence of surgeons and the role of engineering advances such as the invention of the heart-lung machine. Luck also played a part in providing patients whose particular conditions or injuries provided new insights that turned out to have more general application. (Conversely it was sometimes a lack of patients with particular symptoms that delayed the development and perfection of certain approaches.)

The editors are to be congratulated on bringing together such a wealth and variety of focussed material which can be dipped into again and again for entertainment and for (literally vital) information.