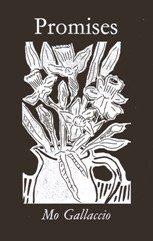 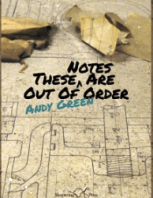 These Notes are out of Order by Andy Green (Shoestring Press) is an unusual collection consisting largely of found material – or perhaps of ‘lost-and-found’ material, since the book is based on the author’s time spent working in libraries and archive departments.  There are quite a few list-poems – for example a catalogue of ‘Early Occupations’ : … manila wharehouse factors / nib slitters / ormolu dealers /…/quaker distributors for non-alcoholic beverages.  A ‘List of Questions Once Addressed to the Reference Library’ (e.g. what is the specific gravity of human blood?) reminds us how google has changed the general public’s rapid access to information.  But the book is not made up entirely of poetry: the middle section is simply a  transcript of a tape-recording of one woman’s memories of the General Strike of 1926; and elsewhere a selection of cuttings from newspapers and journals of the 18th, 19th and 20th century appears under the title ‘Fragments Towards New Histories’.  These items are not without interest but they make the collection a rather uneven read that is somewhat hard to classify.  There are moments however where imagination takes over from reportage and I particularly enjoyed the picture of the smoke-stained bust / of antiquarian William Hamper wandering library corridors at night and opening every drawer of the past / never finding what he’s after yet at the same time re-arranging local history just to keep those damn fools busy. 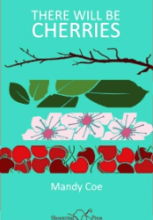 Many of the poems in Mandy Coe’s new collection There Will Be Cherries (also from Shoestring Press) is true to its optimistic-sounding title.  But I can’t help thinking that Coe’s work is more satisfying when she deals with wry or slightly sour observations than when she focuses on the sweet.  Thus, the matter-of-fact way in which we are used to dealing with violence perpetrated on other people comes across in ‘Incident’:  We text : ‘shootin in our st’ .  A stag-night bridegroom, sent aloft by ‘friends’ on helium balloons, had not known that word / was graffitied on the factory roof (‘Flying?’).  Fact and optimism are frequently in tension:  … I catch a glimpse / of two boys kissing and am glad./ Later I read it was a fight and one / has bitten off the other’s ear.  Coe has a lively imagination, as evidenced by her picturing a row of waxwork prime ministers being made into large candles, after which We could blow at the flames / and make a wish (a new model for democracy?).  But her imagination is not always light-hearted and she conjures a harrowingly accurate picture of the refugee camp in Calais where poverty & insecurity exist aongside  lorries carrying cargo of the world / behind taut straps and bolted doors.  Other highlights in the book include some tender poems about memories shared by the elderly near the end of their lives.  Finally I must mention the haunting prose-poem ‘He Lived in a Place…’ from which it is impractical for me to quote but which amply displays Coe’s aptitude for the unsettlingly strange. 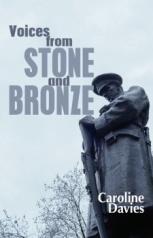 In Voices from Stone and Bronze (Cinnamon Press), Caroline Davies addresses World War 1 through the imagined words spoken by statues on various war memorials.  This is an interesting way of approaching war poetry and it allows us to hear from those who were at first a cog in the army that grinds towards the horizon and who then had to cope with sudden moments of terror: I thought I was going to die / when I threw myself over the rim/ of that enemy parapet./ .. / I made good use of my bayonet on their gunner.  As these extracts suggest, there are some very strong poems in the book; but there could perhaps have been more variation in the style and tone used by the supposedly different soldiers.In fact, they mostly tell their stories in a similar way – i.e. as remembered step by step commentary on an event.  A  change in viewpoint is welcome therefore in several poems written in the voices of sculptors of the memorial statues.  One of them is made uncomfortable by a soldier acting his model who flourishes his bayonet / with some unnecessary violence and who gives off that intense smell of a man who doesn’t bathe.  We also hear from a woman at a memorial ceremony remembering that an officer wrote he died bravely and cheerfully.  // She does not believe a word of it. For me, the strongest piece in the book is a long poem ‘The Euston Rod Mob’ which allows the four figures on the memorial at Euston Station to talk to us – and ultimately to begin to talk to one another.  ‘Are we at war again?’ one of them whimpers when the 7/7 London terrorist bomb goes off in Tavistock Square.  This fine central poem could well be adapted as a performance piece. 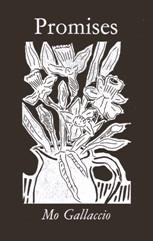 Mo Gallaccio’s illustrated pamphlet Homing In was reviewed in London Grip in February 2012 – see https://londongrip.co.uk/2012/02/poetry-review/.  Her new chapbook Promises (beautifully produced by Paekakariki Press) has  Homing In as its first section and goes on to include ten new poems.  The first of these ‘Tartan Blues’ convincingly conveys the plight of a single mum in a tower block: they rise in the dark / and the light’s away by four / the three o’ them in a top floor tenement / marooned.  (These lines are all the more effective if you can hear them spoken in Gallaccio’s soft Scots accent.)  ‘I want you to know’ is an illustrated prose-poem – a tender but defiant elegy for an actor friend who died on stage mid-way through ‘Godot’.  ‘Fact’ is a well-made symmetric poem with the second half mirroring the first around the almost Shakespearean hinge line I wish the deed undone.  That note of regret occurs again, but in consciously trivialised form, when the poet finds herself in a second-hand market with such a strong urge to buy back / bits of my life: teapots, a  frock – / all those orange paperbacks …  We may all be able to recognise a wish sometimes to take refuge / in an airbrushed past.  There are those however for whom the present cannot be rendered in soft-focus: the title poem ‘Promises’ is about daffodils picked at dawn for meagre pay /  by frozen fingered migrant workers – / bedded in makeshift villages / of caravans.  Gallaccio can hardly have known that her words about nostalgia and references to foreign workers would gain resonance by being read in the days following the EU referendum.   It is to be hoped that the last line of her poem (which remarkably echoes Mandy Coe’s title) is similarly prophetic in uncertain times: There will be Spring.