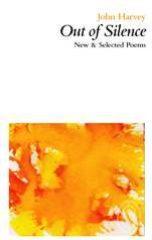 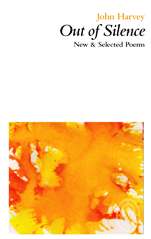 Rosie Johnston gets the first chance to have a say …

John Harvey has been writing since 1975 and has a mighty career to show for it.  His long series of Charlie Resnick crime novels has won major prizes all over the world in twenty languages.  The Times listed his Lonely Hearts as among the 100 best crime novels of the twentieth century and in 2007 the Crime Writers’ Association awarded him their Cartier Diamond Dagger for Sustained Excellence in Crime Writing.

Harvey also set up and ran his own poetry press Slow Dancer from 1977 to 1999, publishing among others Simon Armitage, Tamar Yoseloff and Sharon Olds.  Smith Doorstop published Harvey’s own poetry – Ghosts of a Chance (1992) and Bluer Than This ((1998) – and now brings the best of them together with six new pieces in this New and Selected Poems.

If there is a single thread, it is the poet’s continual torment at the bizarre easiness of dying. It feels sometimes like a poetic version of Haydn’s Farewell Symphony, the one where gradually one by one the orchestra members stop playing their instruments, pack up and leave a single player to finish. He articulates gentle fury at the fragility of life, the knowledge that one way or the other every relationship ends in leave-taking; and yet there is a huge sense of what makes life shine. Who else would write a funny sexy little poem called Safeway?

Harvey’s free verse can feel as relaxed as a sunny afternoon chat between old friends who haven’t seen each other for a while, and then the long-held secrets spill out. In the new poem ‘Saturday’ for example:

Frances died, Jim,
after thirty five years of marriage.
When we were teenagers
you used to call across
the room we shared
“Good night, John,
and God Bless.”

The next stanza describes Stan Tracey playing Monk’s ‘Rhythm-a-Ning’ (jazz is never far away in Harvey’s work) followed by three lines of deadly obliquity and a masterly swing-dancing finish:

And I thought of her and you
and all there was between
you. Interlocked.

This then is what we do,
the only thing we can,
sometimes solo,
sometimes hand in hand:
forward, sideways,
sideways, back.

The selection is dedicated to Harvey’s daughter and she gets her own excellent poem, ‘Winter Notebook’:

My daughter, the youngest, has a date tonight,
the Odeon, a quarter to eight. A first date, too.
Great Expectations. No pressure there, then.
A last glance in the mirror and she’s gone.

Those biting T sounds in the first lines are so full of suppressed anxiety. Then we’re led to think about Pip in the David Lean version:

so that, running away, the boy runs smack into him –
not knowing that sometimes the thing you’re running from
is in the very place you’re running to
only life can teach you that –
I hope the one she’s with is kind, her fragile heart
too full of yet ungiven love to break.

That swivel of the mind back to the main worry feels so real and the compression of wit and emotion effortless but as Nathaniel Hawthorne said, ‘easy reading is damn hard writing’.

‘Sunsets’ compresses what many of us feel about our dying fathers – smiling that even in those last horrific days, the patient can muster a pass at one of the nurses – and moves from that to how Writing, he stands between my sentences. Harvey’s self-pounding honesty is the pivot of the poem:

He stands in all the doorways of my childhood.
Stands for my meanness, my grudging thanks,
those shifts of direction which push him
further and further behind.

‘Lilac’ is a superlative description of how washing his mother in her frail old age brings back the time the poet first became aware of the significance of breasts (his mother’s) in his pre-teens, not long after his father decided he was too old now to be treated as a child:

And so I entered those years of ignorance
and shame, doors quickly closed and clothes
pulled down, the Sunday paper cancelled,
the book of drawings my uncle had
exchanged for his leg in France
no longer in the wardrobe drawer.

The lack of sentiment is as forceful as his tenderness:

We did this unspeaking, unashamed,
the slow easing of pain
as I ran the flannel across your ribs,
the shadows of breasts that hung
like bruised lilac against your chest.

Anyone familiar with Harvey’s work will be looking for the jazz poems and they’re here: ‘Goodnight’, ‘Fuzzy Stone’, ‘Grace Notes’, ‘Oklahoma Territory’, ‘Blue Territory’, ‘Charlie Parker in Green Shoes’. Nobody conveys better the lazy vibrancy of jazz, the urgency of a shared pulse. Harvey’s career includes writing for radio and television and many of the poems are powerful little dramas. ‘Ghost of a Chance’, for example, takes us to the last recording session of tenor sax player Lester Young who adored Billie Holiday and named her Lady Day:

He plays the tune lazily,
pretty much the way he must
have heard Billie sing it,
but slower, thick-toned,
leaning back on the beat,
his mind half on the melody,
half on the gin.

Someone has come to the session to hear him play.

He turns towards the doors:
unseen, not quite unbidden
someone has just slipped in.

Is it Billie? Will the two old lovers manage to have some time together, maybe make music together one last time? The clever use of rhyme and rhythm enhances the poignancy and all sentimental hopes vanish with the final half-rhyme:

After two choruses he will cover
his mouthpiece with his shield:
not play again.

‘Chet Baker ‘is another poem that rolls like expert improvisation over a jazz theme without a syllable out of place. It brings together the old days when Chet had A-list Hollywood friends with the elusiveness of jazz genius and maybe of happiness too: those rare days when he can truly fly.

The title of this selection comes from Harvey’s 1995 poem ‘Out of Silence (Squaw Valley)’. It’s beautiful, almost haiku-like. Here is the whole thing:

How the light diffuses round house corners;
redwood walls, the breaking colour of packed earth,
ochre in the mouth.

The red woodpecker testily chiselling sap from a small ash
the only sound in the valley.

This poet is at his best when he is catching a few precious moments before they’re gone. He leaves spaces between words and between lines for our tears to fall. Harvey says he has written the last of his Resnick thrillers. If that means he is ready to move out of poetic silence, then the thriller world’s loss will be poetry’s treat.

A poet, an ex-publisher and a crime-writer walk into a bar – and his name is John Harvey. I could populate several more such jokes with Harvey’s personae: drummer, jazz lover, art aficionado and dramatist.

Out of Silence marks Harvey’s return to formal poetry years after his two signature collections (Ghosts of a Chance, 1992, and Bluer Than This, 1998). His six new poems prove he has emerged from the stillness. It would be a pity if the new work turns out to be from a century plant (Agave americana), blooming once or twice in a lifetime, but the blossoms are nonetheless beautiful, worth the wait. Harvey’s tutelary spirits are Frank O’Hara of the walk-about ‘lunch poems’ (one new piece is ‘In imitation of Frank O’Hara’), Edward Hopper (think of ‘Night Hawks’, ‘Early Sunday Morning’, Hotel Room’), and jazz greats like Charlie Parker, Lester Young, Thelonius Monk (jazz pianist with a growl), and Chet Baker – who all make an appearance in the poems. Listen to Chet Baker on trumpet doing ‘Almost Blue’ or ‘My Funny Valentine’, then re-read Harvey. You will hear Harvey’s style, one that I call ‘enfolding’: sadness without bitterness, reminiscence without nostalgia, solace without irony – feelings more poignant than those lost moments themselves when they were lived.  If you don’t leave someone, that someone will leave you.  Harvey shares O’Hara’s seemingly careless brilliance: an art that is seamless, disguising the craft.

‘Style’ is the key to Harvey’s writing.  How one says poetry is at least as important as what one says. Duke Ellington’s famous aphorisms apply: ‘It don’t mean a thing if it don’t got that swing, and ‘If it sounds good, it is good.’ Unlike the products from many of our lauded poets, Harvey’s poems, even while plumbing the depths of feeling with unerring prosody, never pretend to be smarter than the reader. He writes the jazz of quotidian life – which is little more than the naming of ordinary things, such as the way Ella Fitzgerald catalogues, ‘These Foolish Things’: https://www.youtube.com/watch?v=cLbgNvjyS4I.  As Harvey writes,

Norbert Hirschhorn  is a poet and critic with four collections to his credit. His website can be found at www.bertzpoet.com.